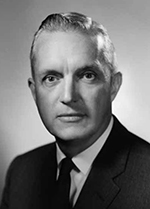 Richard D. Schafer, emeritus professor and former deputy head of the MIT Department of Mathematics, died on Dec. 28, 2014. He was 96.

Schafer joined the MIT mathematics faculty in 1959 as deputy head under department head William Ted Martin. The department had seen a period of rapid growth of faculty and postdoctoral programs in the ’50s, with expanding demands in teaching and graduate supervision. As deputy head, Schafer was instrumental in organizing the application and review processes of the relatively new CLE Moore instructorship program, and in systemizing the assignment of teaching and the scheduling of classes with the Office of the Registrar. He stepped down as deputy head when Ted Martin ended his tenure as department head in 1968, but he stayed on at MIT until his retirement in 1988 as professor emeritus.

Schafer was an algebraist, an expert in non-associative algebras. He did collaborative work with fellow mathematician Claude Chevalley on Lie algebras and extensive work on Jordan algebras. In 1966, Schafer published "Introduction to Nonassociative Algebras" (Academic Press), a book that has served as a standard reference for many years.

Upon his return to academia in 1945, Schafer took a yearlong appointment as an instructor at the University of Michigan. He was a member of the Institute for Advanced Study from 1946-48 and later from 1958-59. He joined the faculty at the University of Pennsylvania in 1948, and moved to the University of Connecticut as a full professor in 1953, where he served as department head until joining MIT in 1959. From 1955-58, Schafer also served as associate secretary of the eastern region of the American Mathematical Society.

In 2013, Schafer was elected to join the inaugural class of fellows of the American Mathematical Society. He had been active for 50 years in the Mathematical Association of America and Phi Beta Kappa.

A lifelong opera fan, Schafer regularly traveled to the Metropolitan Opera in New York City and to the Salzburg Festival in Germany. For 67 years, he was married to the late Alice T. Schafer — a fellow mathematician and longtime professor at Wellesley College, and a co-founder of the Association for Women in Mathematics.