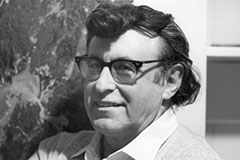 Bertram Kostant, professor emeritus of mathematics at MIT, died at the Hebrew Senior Rehabilitation Center in Roslindale, Massachusetts, on Thursday, Feb. 2, at the age of 88.

Kostant was a professor of mathematics at MIT from 1962 until 1993, when he officially retired, but he continued his active life in research, traveling and lecturing at various universities and conferences around the world.

His legacy spans six decades and 107 published papers, and his ability to connect seemingly diverse ideas led to remarkable results that formed the cornerstone of rich and fruitful theories both in mathematics and theoretical physics. He held a deep passion for truth, for understanding, and for beauty; and an unshakeable faith that these things are woven together.

Bertram Kostant was born on May 24, 1928 in Brooklyn, New York. He graduated from Peter Stuyvesant High School in 1945. After studying chemical engineering for two years at Purdue University, he switched to mathematics, having fallen in love with the subject in the classes of Arthur Rosenthal and Michael Golomb, who were recent immigrants from Germany. In 1950 he earned a bachelor's degree with distinction in mathematics.

Kostant was awarded an Atomic Energy Commission Fellowship for graduate studies at the University of Chicago. There, he found a stimulating environment. Influences on him included Marshall Stone, Adrian Albert, Shing Shen Chern, Paul Halmos, Irving Kaplansky, Irving Segal. Through Andre Weil, Kostant was exposed to the ideas of the Bourbaki group in thinking about and writing down mathematics. Edwin Spanier’s course on Lie groups used Chevalley’s text. He often said, “the sheer beauty of it all resonated with me.” This was the beginning of his lifelong passion for Lie groups — the continuous families of symmetries at the core of great parts of geometry, mathematical physics, and even algebra. His work ultimately touched almost every corner of Lie theory: algebraic groups and invariant theory, the geometry of homogeneous spaces, representation theory, geometric quantization and symplectic geometry, Lie algebra cohomology, Hamiltonian mechanics, and much more.

Kostant received an MS in mathematics in 1951, and under Irving Segal, his PhD in 1954, with a thesis titled, “Representations of a Lie algebra and its enveloping algebra on a Hilbert space.”

Between 1953 and 1956 Kostant was a member of the Institute for Advanced Study in Princeton. In 1955-56 he was a Higgins Lecturer at Princeton University, where he investigated the “holonomy groups” arising in differential geometry and worked deepen our understanding of the structure of the so-called "simple" Lie algebras.

From 1956 to 1962, Kostant was a faculty member at the University of California at Berkeley, becoming a full professor in 1962. He was a member of the Miller Institute for Basic Research from 1958 to 1959.

In 1962 Kostant joined the faculty at MIT, where he remained for the rest of his career. He was devoted to his weekly seminars in Lie theory. Over the years he supervised more than 20 PhD students — among them, the differential geometer James Simons — and served as a mentor to many postdocs and young faculty members. He worked with great energy and success to build MIT’s faculty in Lie theory and representation theory.

In the early 1960s, Kostant began to develop his “method of coadjoint orbits” and “geometric quantization” relating symplectic geometry to infinite-dimensional representation theory. Geometric quantization provides a way to pass between the geometric pictures of Hamiltonian mechanics and the Hilbert spaces of quantum mechanics. His ideas have been at the heart of several very different mathematical disciplines ever since.

Again and again, Kostant was able to make powerful use of the relationships he found between deep and subtle mathematics and much simpler ideas. For example, in the early 1960s he proved a purely algebraic result about “tridiagonal” matrices. In the 1970s, he used that result and the ideas of geometric quantization to study Whittaker models (which are at the heart of the theory of automorphic forms) and the Toda lattice (a widely studied model for one-dimensional crystals).

Kostant received many awards and honors. He was a Guggenheim Fellow in 1959-60 (in Paris), and a Sloan Fellow in 1961-63. In 1962 he was elected to the American Academy of Arts and Sciences, and in 1978 to the National Academy of Sciences. In 1982 he was a fellow of the Sackler Institute for Advanced Studies at Tel Aviv University. In 1990 he was awarded the Steele Prize of the American Mathematical Society, in recognition of his 1975 paper, “On the existence and irreducibility of certain series of representations.”

In 2001, Kostant was a Chern Lecturer and Chern Visiting Professor at Berkeley. He received honorary degrees from the University of Córdoba in Argentina in 1989, the University of Salamanca in Spain in 1992, and Purdue University in 1997. The latter, from his alma mater, was an honorary Doctor of Science degree, citing his fundamental contributions to mathematics and the inspiration he and his work provided to generations of researchers.

In May 2008, the Pacific Institute for Mathematical Sciences hosted a conference: “Lie Theory and Geometry: the Mathematical Legacy of Bertram Kostant,” at the University of British Columbia, celebrating the life and work of Kostant in his 80th year. In 2012, he was elected to the inaugural class of fellows of the American Mathematical Society. Last June, Kostant traveled to Rio de Janeiro for the Colloquium on Group Theoretical Methods in Physics, where he received the prestigious Wigner Medal, “for his fundamental contributions to representation theory that led to new branches of mathematics and physics.”

A memorial will be held at MIT in late May. Further information will be posted on the MIT Department of Mathematics website.