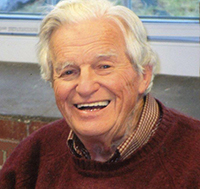 David J. Benney, professor emeritus of applied mathematics at MIT, died on October 9, 2015, after a period of declining health. He was 85.

Benney joined the MIT mathematics faculty in 1960 as assistant professor. He received the PhD in applied mathematics from MIT in 1959, studying under Chai-Chiao Lin, and continued at MIT as Instructor 1959-60. He was promoted to full professor in 1966, and retired from MIT in 2010.

Benney chaired the Applied Mathematics Committee from 1983-85. He served as Department Head for two terms, 1989-99, a period of major transition for the Department and MIT. David set the pace for future departmental administrations through major fund raising, building innovation, and furthering the Department’s cross-disciplinary culture. He expanded the visiting professorship program and hosted several first-rate visitors. He oversaw the appointment of many leading scholars to the faculty, thereby establishing the current strength of the Department.

David Benney’s research was highly original: he made pioneering contributions to applied mathematics. He was at the leading edge of a paradigm shift in thinking about nonlinear wave systems in fluid dynamics. He not only rationalized important physical phenomena, but derived equations to describe them that became relevant in a wide variety of contexts, including aerodynamics, meteorology, oceanography, atmospheric sciences and optics.

Benney’s principal research contributions lie in the mathematical analysis of nonlinear waves, hydrodynamic stability and transitions to turbulence. Beginning with his Ph.D. under the direction of C.C. Lin in the 1950s, Benney and early collaborators showed that nonlinear wave interactions were fundamental to the study of hydrodynamic stability, and could lead to the emergence of turbulent bursts, as were later observed in experiments done at the National Bureau of Standards.

David did pioneering work clarifying how nonlinearity could affect the stability of flows including shear flows over plates. This was a major advance in the field and led to many important developments in the theory of turbulence. He continued his studies of hydrodynamical stability and transition through his mentoring of numerous doctoral students and postdoctoral associates.

His research on the dynamics of nonlinear waves had enormous impact in multiple fields. In his early work in 1962 describing nonlinear wave interactions in water waves, Benney developed key mathematical tools that were subsequently used extensively by the applied mathematics community. In 1964, he and his masters student, J. Luke, derived an equation governing three dimensional weakly nonlinear shallow water waves. This equation, known as the "Benney-Luke Equation," led to considerable research and applies in a variety of physical settings, including long wave interactions on flat beaches and long distance tsunami propagation. His further work on long waves was seminal: he showed how to find the governing equations in general circumstances. His related research on wave propagation in thin films has been used widely in many technological applications such as film-based photography and coating of materials. His research in the 1970s on large-amplitude long waves led him to formulate a novel system of equations, the so-called "Benney System," that has since been the subject of many mathematical investigations.

Benney's research was often ahead of his time. In 1967, with his first Ph.D student, A. Newell, Benney showed that a particular equation (known as the nonlinear Schrödinger equation) arises universally in diverse applications in nonlinear dispersive waves. Subsequent researchers found that this equation arises in the mathematical description of water waves, plasma physics and intense light waves. He soon followed with important work on three-dimensional modulated waves in water. With his student G. Roskes, he derived a system of equations, known as the 'Benney-Roskes' equations, which has been widely used. Shortly thereafter, with his student M. Ablowitz, he formulated a novel class of quasi-periodic modulated wave trains. Years later, this too was found to arise in various physical systems, including fluid dynamics, optics and Bose-Einstein condensates.

David was a dedicated teacher and mentor. He had a remarkable ability to work effectively with Ph.D students. He mentored 18 PhDs, producing 158 academic descendants. David Benney left an extraordinary legacy.

He was beloved of colleagues who knew him well and worked with him closely. One of David's former students and later colleague stated, "Dave was a modest man who had little to be modest about. With his gentle, self-effacing manner and humor, he tended to deflect any superlatives and accolades aimed in his direction. But in truth, he was a first rate leader: generous to all, regardless of rank, he had a strong moral compass, a principled view of life and a backbone of steel when it came to doing the right thing".

A conference was held in 2000 in honor of his 70th birthday. An account of his many contributions can be found in "Research Contributions of David J. Benney," by M. Ablowitz, T. Akylas and C.C. Lin, in Studies in Applied Mathematics (Vol 108, 2002, p.1-6). That issue also contains a number of articles written by his former students and colleagues in his honor.

Benney served for 46 years (1968-2013) as Managing Editor of Studies in Applied Mathematics. Under his long tenure, he steered the journal to prominence, making it a leading journal in physical applied mathematics.

With Harvey Greenspan, he co-authored the widely-used text, Calculus: An Introduction to Applied Mathematics, published in 1973 by McGraw Hill (later republished by Breukelin Press in 1997).

David Benney is survived by his wife of 56 years, Elizabeth Matthews Benney, and by his three children: Richard Benney of Stow, Paul Benney of Bloomfield, CT, and daughter Antonia Benney of Longmeadow, and two grandsons, Luke and Jon.

A celebration of David Benney’s life will be held for family, friends and colleagues at his home on October 18, 2015.