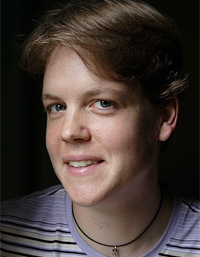 Katrin is a careful mathematician. She's good at spotting mistakes, even tiny, yet fatal errors in other people's published papers.  She has a collaborator who knows that when he throws ideas at her, she can comb through the mess and identify a promising starting point. That skill, she says, requires a certain "happiness to be confused."

"Every now and then there’s a little understanding, a ray of light," she says, "but when you manage to open a door and enter the next room, it only takes a day to see 5 new closed doors." She welcomes those challenges of symplectic topology. Katrin's real frustrations come from her observations of math culture, social issues that could soon become real scientific problems.

"We don't write good papers anymore," she says. Many proofs are published with gaps or unnecessarily complicated logic, as if the author didn't have the time or patience to explain the idea. She likes to use a mountain metaphor: "It's like if some really well trained climber made it to the mountain top. But they didn't leave any hooks along the way, so someone with less training will have no way of following it without having to find the route for themselves." But if mathematicians build a safe ladder, they avoid logical errors and future students need not repeat the discovery on their own journey.

It's an issue of communication to Katrin. For example, it is sometimes impossible for a mathematician today to decipher even a 50-year-old paper without knowledge of the implicit assumptions within math culture back then. She thinks mathematicians need to provide full details as well as give an expository description of the idea of the proof. Otherwise, students either have no way to approach the proof themselves, or they grow up assuming it’s fine to be vague about certain things. Knowledge is squandered by ego.

In Katrin's experience, women bring a different culture of thinking into mathematics that helps deal with these issues.

It's not that all men and women have distinct ways of doing math, but she notices that many women tend to focus on what they do not understand, while their male colleagues often rush to push together pieces they do understand and just take certain things for granted along the way. She sees it all in the time in the classroom. Women may be left behind while concentrating on a source of confusion unless they have the confidence to ask the question. If they do, the resulting discussion often clarifies a deeper issue for the entire class. So, Katrin believes that a higher representation of women, and people of diverse backgrounds in general, could produce an educational climate in which communication and clarity are valued higher.

Katrin came out as a gay woman during a panel discussion at an MIT women’s math conference, and to loud applause. Since then, she's hoped that queer women would become more visible in academia and become role models for others. "It's important for LGBT people to be proud and visible not just for themselves, but also for everyone who comes after them to show the next generation that their sort of life has been lived before and it's still possible to do math."

She's been helping with an intense and successful effort by MIT to recruit students and post docs from nonstandard backgrounds. When looking at applications, she says the committee looks for evidence of a strong trajectory rather than how the students currently compare to peers or if they took AP calculus in high school. Oftentimes, those people are women. "When we find those students, we don't just email an offer," Katrin says, "We tell them in person how much we will do to help them succeed at MIT." "Actually that's why I'm here," she points out. "I had tons of offers, but MIT was one place where I was sure they didn't just need to fill a quota, they actually wanted me. They went out of their way to sweeten the deal. They even would have found me a place to store my boat."

Katrin Wehrheim is an Associate Professor of Mathematics at MIT. Here, she studies how differential equations behave in abstract curved spaces, mainly within the fields of symplectic topology and gauge theory. She attended graduate school at ETH Zurich, during which she almost dropped math to row in the Olympics. Instead, her PhD thesis in mathematics won the ETH medal in 2002. She was an instructor at Princeton University and member of the IAS before arriving in Cambridge, where she still enjoys rowing whenever the Charles River isn’t frozen. In 2009 she received an NSF Career Award, whose educational component helps fund many activities at MIT for women in math.